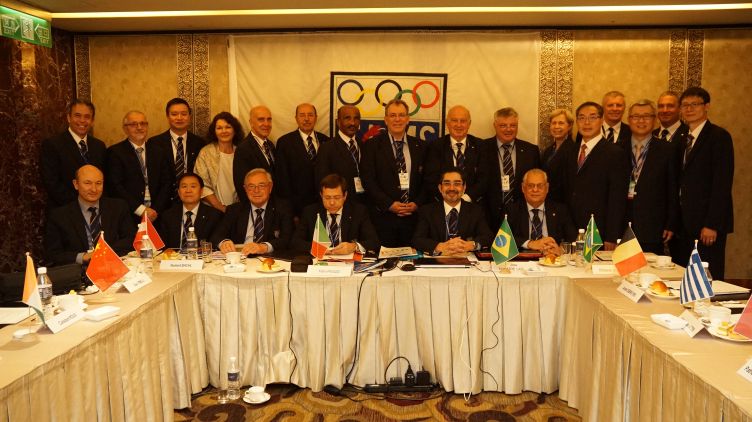 The FIMS Executive Committee met in Taipei, Taiwan on the 8th April 2016, on the invitation of and hosted by the National Olympic Committee of Chinese Taipei who in parallel organized the ‘International Conference of Sports Medicine’.

Numerous important issues were discussed at the FIMS Executive Committee meeting such as the change in location of the 2016 FIMS World Congress from Istanbul (Turkey) to Ljubljana (Slovenia), news from the Standing Commissions and the current financial situation of the organization. The FIMS President Prof. Fabio Pigozzi reported on his negotiations with new and previous sponsors. A critical matter was the revision of the FIMS Statutes and By-laws which had been carefully undertaken by FIMS Executive Committee members and the FIMS Legal Counsel. A number of revision were proposed based on the principles regulating International Federations and the Olympic Agenda 2020. These revisions were unanimously endorsed by the Executive committee and will be submitted for final approval at the next Council of Delegates to be held in Ljubljana in October 2016.

There was also extensive discussion on how best to build on the recent visit of the IOC to the FIMS Collaborating Centre of Sports Medicine for Anti-Doping Research directed by Prof Yannis Pitsiladis, Chairman of the FIMS Scientific Committee, that had taken place end of March 2016 and been aimed at establishing a closer relationship between FIMS and the IOC in terms of anti-doping research. The IOC delegation, led by Professor Uğur Erdener and including Dr Richard Budgett and Professor Lars Engebretsen, toured the purpose-built, state-of-the anti-doping research facilities and attended a debate entitled "What next for anti-doping: evolution or revolution?"

The Executive Committee members were also informed on the comprehensive FIMS activities at the 3rd International Convention on Science, Education and Medicine in Sport (ICSEMIS) "Saying 'Yes' To Diversity in Sport" that will take place from 31st August to 4th September 2016 in Santos, Brazil, during the time window between the Olympic and Paralympic Games.