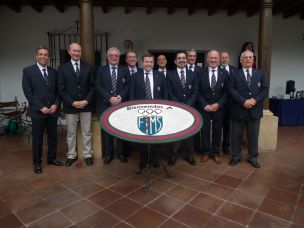 The Executive Committee of the International Federation of Sports Medicine (FIMS) met in Antigua on the 20th October 2015. Venue of the meeting was the idyllic Hotel Casa Santo Domingo; a bastion of one of the grandest convents in America.

The FIMS President welcomed all the members attending the meeting. After thanking Dr. Robles, FIMS Executive Committee Member and member of the National Olympic Committee of Guatemala, for the warm hospitality offered to the Executive, he reported on the significant development of the network of the Collaborating Centres of Excellence. The network has grown to 22 in number with the new entry of Salzburg (AUT), Sao Paulo (BRA), Turin (ITA) and Moscow (RUS). The President briefly summarised the outcome of the meeting of their Directors held in Milano on 18th September 2015. He also informed the members that the Chairman of the IOC Medical Commission, Prof. Erdener, and the IOC Head of Scientific Activities, Prof. Lars Engebretsen, announced their intention to visit the Brighton FIMS Collaborating Centre for Anti-Doping Research within the next months. Further, the cooperation between the IOC and FIMS will be significantly strengthened by the appointment of Prof. Lars Engebretsen as the new IOC Representative on the FIMS Executive Committee.

The Executive Committee discussed numerous items of “business as usual”. Particular highlights were the cooperation with International Organizations related to sports medicine and preparations for the 34th FIMS World Congress of Sports Medicine to be held in Istanbul from 30th September – 2nd October 2016.

Prof. Yannis Pitsiladis was appointed as the new Chair of the FIMS Scientific Commission after the recent resignation of the previous Chair.

A Sports Medicine Congress coincided with the FIMS meeting and was attended by Willi Kaltschmitt Luján, IOC Executive Board member.