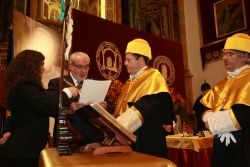 On 8 October 2015, Prof. Fabio Pigozzi, President of the International Federation of Sports Medicine FIMS, was awarded a Honoris Causa PhD in Health Sciences. During the ceremony that took place on Thursday October 8th 2015 at the Catholic University San Antonio of Murcia (UCAM), Spain, the FIMS President received a Honoris Causa Doctorate in Health Sciences. With this gesture, the UCAM wished to honour a world-known sport physician for his fundamental scientific research contribution to the Sports Medicine. The laudatio was given by Prof. Pedro Manonelles Marqueta, President of the Spanish Society of Sports Medicine.

Prof.  Maurizio Casasco, Chairman of the FIMS Development Commission and President of the Italian Federation of Sports Medicine, and Prof. Norbert Bach, FIMS Secretary General, attended the ceremony in addition to many authorities and representatives.

Only in March 2015, the President of the International Olympic Committee, Thomas Bach, had been awarded the same honour by UCAM.